MSSL, UCL is developing a stereo workstation application within the ProVisG project since Dec. 2008 and this subtask runs till Aug. 2011.

ProVisG T3.7 description states that this aims to:
“Synchronise other stereo workstation efforts so they are harmonised with joint development work with JPL, provide information on mutual efforts and on student project work”

We interpret this as:

The stereo workstation as currently implemented at MSSL appears in the adjacent picture. This is a passive stereo display and polarising glasses are required to view the combined image of the two LCD monitors via a half silvered (i.e. semi transparent) mirror. For the top monitor image it’s polarisation is modified upon reflection in the half silvered mirror to align with the polarisation direction of the above the user’s right eye. The lower monitor image passes straight through the mirror aligned with the polarisation direction of the lens above the left eye.

The JADIS stereo rendering engine written by JPL has the following capabilities:

The output product is a 3D model (i.e. the x,y,z co-ordinates of the surface and an optional texture map) of the terrain in the stereo pair (left).

The functional relationships between the workstations different software components are summarised in the following UML diagram. 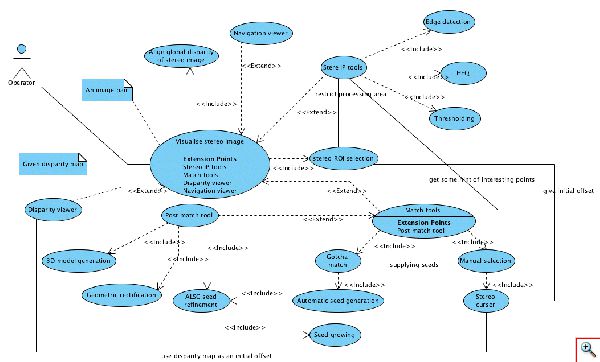