WALI (wide Angle Laser Imager) is a laser-based system to detect the fluorescence from organic compounds. A laser is used to illuminate a target surface at one wavelength and a digital camera records any resulting fluorescence at a second (usually longer) wavelength. Filters in front of the camera are used to reject all unwanted light outside of the fluorescent wavelength range.

The required excitation (laser) and emission (camera) wavelengths are unique for each compound of interest allowing confidence in the detection. The strength of the signal above the detection limit gives an estimate of the amount of the compound present in the surface layer.

A wide range of organic compounds emit over the visible and near infrared response range of the camera – e.g.:

Therefore, WALI has the potential to detect biomarkers, i.e. organic compounds needed by the cells of living organisms (or their remains). We plan to demonstrate these abilities during the PRoViScout field trial where WALI will be used to gather data as part of the simulated exobiology rover mission.

If deployed on the 2018 ExoMars rover mission WALI would be used to search for evidence of prebiotic chemistry (i.e. PAHs) delivered to Mars by meteorites. These compounds are also detected in molecular clouds in interstellar space (similar to the one our solar system formed from) where they are thought to be created from the reactions of simpler carbon compounds, promoted by ionising UV light and charged particle radiation. They are routinely detected in meteorites discovered on Earth and so should also have become distributed through the upper layers of the Martian surface over time (since Mars is also impacted by the same population of meteorites).
The previous NASA Viking landers failed to locate any organics in the

Martian soils. This finding led to the hypothesis that the meteoritic PAHs are rapidly destroyed by oxidising compounds, formed by the interaction of solar UV and charged particles with iron oxides in the soil. The recent NASA Phoenix lander has discovered perchlorate salts in the Martian arctic which when dissolved in liquid water would perform this organics-scavenging role. 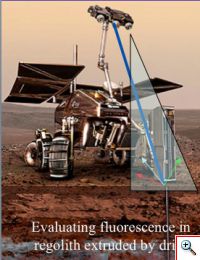 Calculations show that the concentrations of oxides should decrease with depth below the Martian surface, so by searching for PAHs in the ExoMars rover drill tailings WALI could be used to indicate the correct depth at which to obtain samples that have a reasonable chance of containing the biomarkers that the mission is searching for; i.e. the level at which the oxidizer concentration has fallen low enough to allow the survival of the expected PAHs and any other organics that might be present.

For more details on how WALI could be used on Mars see: Storrie-Lombardi et al. (2009), Laser-Induced Fluorescence Emission (L.I.F.E.): Searching for Mars Organics with a UV-Enhanced PanCam. Astrobiology 9, 953-964.